Anyone who takes a trip on the Colorado River will report on the excitement of running the rapids, many of which can be quite dangerous.  However, the geology of the Canyon is equally thrilling to those who are even mildly interested in earth history and surface processes.  The rapids themselves generally exist at locations where side-streams have delivered large volumes of sediment to the River (boulders!) during intense thunderstorms.  Rapids also form where the River encounters highly resistant rock types, but the most common occurrences of rapids are at the mouths of the tributaries.  Examples of both of these types of settings are seen here – the most dramatic in the first category is at Lava Falls, where a “lava dam” has been created by repeated flows of volcanic material into the Canyon over the past million years.  Images of Unkar Rapids in the Chuar Valley segment of the Canyon show how rapids form at the mouth of a tributary side-stream.

Several good sources of information about the geology of the Canyon are available.   The slides below, and associated text, describe a few of the significant sections of the Canyon where distinct types of rocks or processes are encountered. The text follows the order of the slides, with reference to mile points measured from the start at Lee’s Ferry.  Two images were taken in 1871 (Jack Hillers photographer).

The start at Lee’s Ferry at one of the few places where there is road access to the River.  The view is looking upstream toward the Vermillion Cliffs (#1).  Navajo Bridge (#2) is less than 6 miles downstream from the start, and the River is now deeply incised into the beginnings of Marble Canyon.  Boulder narrows is found at mile 18 (#3), where a large rockfall occurred (it was not noted in the original exploration notes in 1869).  Where the Little Colorado River joins the Colorado (mile 61) there is a large debris fan and rapids (#4). Photos #5 and #6 show views of the debris fan and foreground rocks taken in 1970 and 1871, respectively.  Note the only differences are in the shape of the debris fan.  Images #7 through #11 show the Chuar Valley area, where the River flows through gently dipping Pre-Cambrian sedimentary rocks, forming a valley that is wider than in the more resistant rocks found upstream or downstream.  The South Rim of the Canyon is visible in #7, one of the few times when one can see the Rim from the River; Desert View Tower at the eastern end of the South Rim is barely visible in #7.   #10 shows the contact between the dipping Pre-Cambrian strata and overlying and younger, flat-lying Paleozoic strata. This contact is a major unconformity that represents a gap in time of almost a billion years (see #18).   Images #12-16 are scenes of the River as we pass through the dipping Pre-Cambrian strata into the Inner Gorge, which is usually very narrow because of the resistant metamorphic rocks exposed over the next ~100 miles of the River’s course.  #17 was taken at Sockdolager Rapids in 1871 – these images of the Inner Gorge show how inescapable the Gorge can feel, as there are very few ways to access higher ground.   #18 shows the contact between the Inner Gorge’s metamorphic rocks (~2 billion years) and the overlying early Paleozoic (~500 million years) Tapeats Sandstone (seen in the upper right of the photo).   #20 shows Havasu Creek, flowing blue because of dissolved salts.   #21 and #22 show Lava Falls (mile 179) from water level and from the air; #23 shows one of the volcanoes that dot the landscape of the western Canyon region.  #24 shows the view to the north up a side-stream known as Separation Canyon (mile 239), where three members of the original (1869) Powell Expedition left the group to find an escape from the exhaustion and fear of that long journey.  Sadly, the three were never seen again, and to magnify the irony of their loss it was just a day later (after three months on the River) that the Powell group “escaped” the Canyon to the lowlands of what is now the upstream portion of Lake Mead, seen in slide #25.  The Canyon abruptly ends at the Grand Wash Fault, which separates the lowlands to the west from the western margin of the uplifted Colorado Plateau.

Three links to good summaries of the Canyon’s geology: 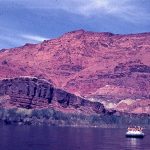 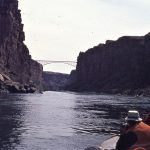 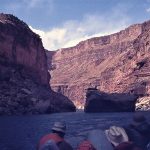 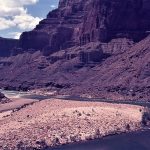 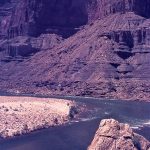 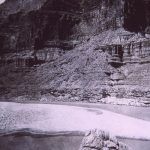 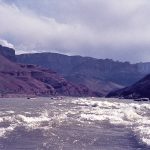 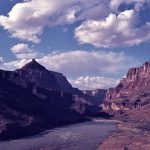 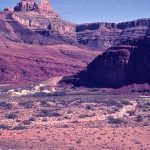 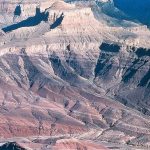 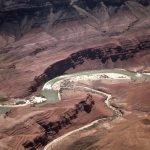 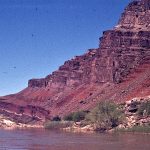 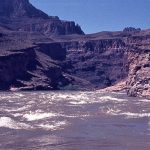 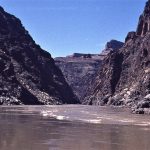 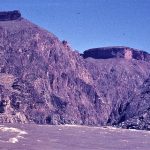 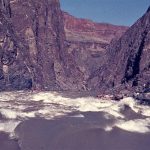 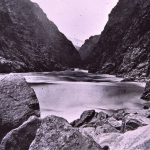 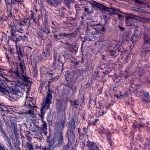 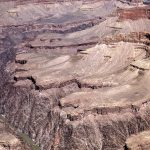 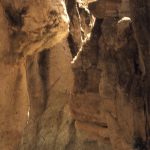 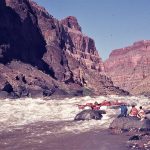 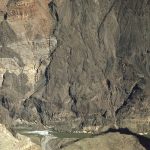 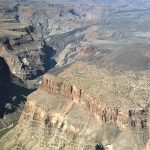 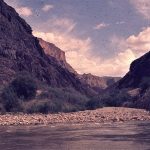 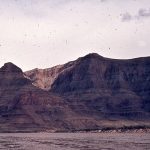